Alexander Coenraad Rosemeier was born in Surakarta on 18 July 1888 and died in Leiden on 15 August 1992. His call name was Alex Rosemeier. He was a watercolourist, etcher, painter and draughtsman.

Alex Rosemeier’s artistic talent will probably have come from her mother’s side. Her grandfather was in fact portrait painter Herman Thepass (1785-1847). Rosemeier moved with his father from the Dutch East Indies to the Netherlands in 1900. His mother had already died in 1892.

Father Rosemeier inhibited his son’s artistic ambitions whenever possible. To convince Alex of the uncertain existence as an artist, he asked advice from painter Johan Hendrik Weissenbruch (1824-1903). Johan Weissenbruch, however, had praise for Alex.

After the death of his father, Rosemeier became a professional soldier in 1908. He was stationed at the Morschpoort barracks in Leiden. In 1914 Alex Rosemeier married Grietje Mast (1893-1969).

During his military service he was taught by the Belgian painter Alphonsus Charlotte Leonardus Baeyens (1887-1954). Alfons Baeyens fled to the Netherlands during WWI (1914-1918) and worked in Leiden.

In 1923 his contract with the army expired and he became an independent artist. He supported himself and his family by working several jobs in addition to being an artist. From the 1930s onwards his works of art brought in enough money for him to make a living from them.

The Leiden School was a group of artists active in the first half of the twentieth century. They painted in and around the Dutch city of Leiden. The group is also referred to as the Leiden Impressionists, a movement affiliated with the Hague School. Alex Rosemeier, along with other painters, is counted among the core of Leiden School. They include Willem Johannes Pasman, Arend Jan van Driesten, Willem van der Nat and Chris van der Windt.

Other painters who are counted among this group include Lucas Verkoren, Floris Verster, J.C. Roelandse and Laurent van der Windt.

In the villages of Nieuwkoop and Noorden, Alex Rosemeier also worked together with W.J. Weissenbruch(1824-1903) and J.H. Wijsmuller (1855-1925). He also worked with J.A. van Driesten and with Chris van der Windt in the Leiden area. 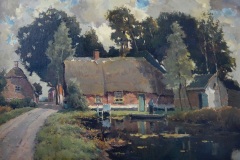