Dutch painter Adriaan Herman Gouwe was born in the citry of Alkmaar on May 8, 1875. He died in Papeete (Tahiti) on December 28, 1965. In addition to being a painter, Herman Gouwe was also an etcher, draftsman and watercolorist. He belongs to the Dutch luminists.

Herman Gouwe started his training with the Alkmaar decorative painter Luitenet. He then followed a course at the National School of Applied Arts and the National academy of visual arts in Amsterdam. At the National School Herman was taught by August Allebé (1838-1927), Georg Sturm (1855-1923) and Nicolaas van der Waay (1855-1936).

Herman Gouwe lives and works in Amsterdam until 1901. He is a member of the artists’ association Arti et Amicitiae (Arti, Amsterdam). Thanks to an inheritance and a money from the Prix de Rome in 1901, Herman went on a study trip. From 1901 to 1903 he makes a study trip to Italy. He then settles in the city The Hague until 1905. After 1905, Herman Gouwe lives and works until 1910 in Gulpen, a village near the city Maastricht. At the National Academy he had met the Maastricht painter Rob Graafland (1875-1940), who became his friend. Rob Graafland persuaded Herman to come to the province of South Limburg.

From The Hague School to Luminism

Initially, Herman Gouwe painted in the traditional style of the Hague School. Around 1910 he became inspired by Luminism. Jan Sluijters (1881-1957), Leo Gestel (1881-1941), Jan Toorop (1858-1929), Ferdinand Hart Nibbrig (1866-1915) and Piet Mondriaan (1872-1944) set the example. Luminism emphasizes strong light effects through an optical mix of colors. It therefore has many similarities with pointillism. This gave Herman’s work more sunlight and color.

In 1910 Herman Gouwe moves to the village Blaricum, where he continues to live until 1912. From 1912 to 1915 he made study trips to France, Italy and Spain. In 1915 Herman stays temporarily in Morocco. He then returns to Blaricum until 1916. From 1916 to 1917 Herman Gouwe relocated to South Limburg in the village of Gulpen. Then Herman leaves in 1918 for the village of Laren (province Noord-Holland), where he lives until 1921. In the fall of 1920 Herman, together with Henri Jonas, made another trip of a few months to Tangier. Herman Gouwe lives in the village of Eemnes until 1925 and in 1923 his teacher George Sturm dies. In 1925 Herman lives temporarily in the Belgian village of Eben-Emael, but soon settles in Maastricht until 1927.

The turning point in his life

From 1909, art critics and art collectors discover the innovative work of Herman Gouwe. His South Limburg landscapes and plowing horses were sold well at his first exhibition at St Lucas. The art patron P.A. Regnault (1868-1954) – a rich paint manufacturer – even calls him the new Vincent van Gogh. Regnault became his most important client and in 1953 donated his paintings to the Municipal Museum in Amsterdam.

Over the years, the great demand for his paintings with plowing horses becomes too much for him. Herman feels like a prisoner of his own success. In the summer of 1927 he leaves for a holiday in France. Herman reads an article about Tahiti in a local French newspaper and decides to leave. Without first going back to the Netherlands, Herman Gouwe takes a boat to Tahiti. He arrives there on December 14, 1927. Then Herman settles in Raiatea and turns his back on the art trade for good. But in 1940, 1951, 1956 he exhibits in Papeete. His luministic palette in Tahiti grows into a clear and expressive color harmony.

Herman Gouwe returns to the Netherlands in 1959, accompanied by a number of crates with paintings. These are exhibited in Maastricht and the Municipal Museum in Amsterdam. After a few months he returns to Tahiti and dies there in 1965.

The Municipal Museum in Amsterdam and the Frans Hals Museum in Haarlem have work by Herman Gouwe in their collection. In addition, the Central Museum in Utrecht and the Drents Museum in Assen also have paintings by him. 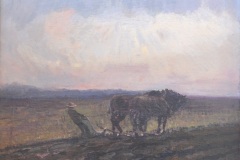