Dutch artist Painter Adrianus Johannes Zwart was born in Rijswijk (ZH) on August 30, 1903 and died in Laren on August 27, 1981. His calling name was Arie Zwart.

In 1914 Arie Zwart won a box with painting materials at school and in 1915 he made his first painting. He was a pupil of painter Otto Gustav Adolf Kriens (1873-1930) of the Royal Academy of Art in The Hague (1918-1919). Further he got lessons from the famous Dutch artist Louis Soonius, who was a friend of the family.

In 1920 he started working for an advertising agency in Amsterdam. He then lived in Rijswijk, a village close to The Hague. In 1924 Arie met his wife, with whom he married in 1926. He then moved to the village of Veur, now Leidschendam (1926-1931).

Then Arie moved to The Hague (1931-1933) and then to a caravan (1933) in Lage-Mierde. At the beginning of 1936 he had a houseboat built that was named ‘De Trekschuit’. The houseboat is located in the harbor of Zaltbommel. With this houseboat, Arie makes trips through the provinces of Noord-Holland and Zuid-Holland.

From 1939 until the end of the war, his houseboat was moored in the village of Meppel. From this location Arie made trips to the beautiful village Giethoorn and the city Zwolle.

After the war he left with his houseboat to the places: Noorden, Woerden, Nieuwkoop, Diever and Havelte (the province Drenthe).

In 1949 the houseboat is in Voorburg, in 1960 in Zierikzee and from 1962 in Woerden again. In the intervening period, from 1951, Arie stayed with short periods in southern France. Furthermore he was in 1968 in Portugal and in 1969 in Spain and Tunisia.

At the end of 1974 he and his wife moved into the Rosa Spierhuis in Laren. In this nursing home Arie died in 1981.

Arie was a very versatile painter and draftsman. He painted according to The Hague School in a naturalistic-impressionistic style of landscapes, still lifes and interiors. The Dutch landscapes are often of farms, polder ditches and backyards.

Under the influence of the ‘Meppeler School’ his work became lighter and often more cheerful in color from 1938 onwards. Arie Zwart made many reproductions of his paintings. 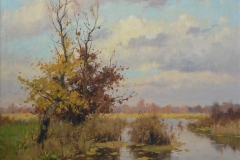