The Dutch painter August Johannes Le Gras was born on February 21, 1864 in Amsterdam. Le Gras died on 1 November 1915 in Laren (Noord-Holland). Besides being a painter, he was a draftsman, etcher and pastelist.

The father of August Le Gras had French nationality. His mother was of German descent. Le Gras followed an education in the period 1879-1887 at the National Academy of Visual Arts in Amsterdam. He was a pupil of August Allebé (1838-1927), Rudolf Stang (1831-1927) and Barend Wijnveld (1820-1902). In 1879, Le Gras began painting portraits as an example of photographs. Later he became known as a painter of animals.

Le Gras painted, from 1882 till 1889, regularly in the Amsterdam Royal Zoo “Artis”. From director Gerard Westerman he even got a small studio at his disposal in the zoo.

In 1890 Le Gras lived and worked temporarily in the village of Baarn. In 1892 he made a study trip from one year to Algeria. This trip was funded by beer brewer Gerard Heineken, for whom he had painted his horses. When Heineken died in 1893, his financial support disappeared.

Back in the Netherlands, Le Gras started to make portraits again and he came into contact with Jan Herman van Eeghen. Van Eeghen was a banker and an important art collector in the Netherlands. With his financial support, Le Gras made several trips to Algeria, Egypt and Tunisia.

In 1899 Le Gras returned to live in Amsterdam. Then he settled temporarily (1900-1901) in Hilversum. Until 1905, Le Gras lived in the large house of Dutch painter Evert Pieters (1856-1932) in the village Blaricum. After Blaricum he stayed until his death in the village of Laren.

His genre and artists’ associations

Le Gras painted portraits, figure representations, landscapes (genre), still lifes, cityscapes, street scenes and animals (genre). He had several animals roaming around his house and atelier. Le Gras bred Arab pedigree dogs and a separate breed of rabbits. He also had a chameleon brought from Africa in his collection, which he eventually donated to Artis Zoo. 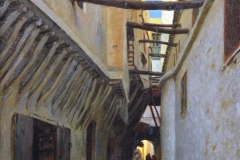