Dutch artist Anton Koster was born on August 8, 1859 in Terneuzen. Anton died on May 28, 1937 in the village of Heemstede. His full name is Antonie Louis Koster. In addition to being a painter, he was a draughtsman, etcher, pastelist, watercolorist and designer.

Antonie Louis Koster grew up in the town of Terneuzen in the province of Zeeland. His father was Willem Theodorus Koster and his mother was Pieternella Catharina Noske.

Because Willem went to work for a ministry in The Hague, the family moved to this city in 1865. At a young age Anton Koster was occupied with drawing. He was stimulated by his immediate environment to develop himself further in this. After the Higher Civil School (HBS school) he therefore followed a course at the Royal Academy of Art.

Then, after completing his education, Anton Koster made a study tour in France (1883-1884). During this period he stayed mainly in the Pyrenees. During this trip he saw in Paris the painting “Dutch Bulb fields and windmill near Rijnsburg” by Claude Monet (1840-1926). This painting will play an important role in his development.

For a long period of his life, Anton was mainly engaged in etching and drawing landscapes, cityscapes and flowers. From Charles Louis Philippe Zilcken (1857-1930) Anton Koster received lessons in making etchings. From this contact a close friendship developed.

At the beginning of the nineties Anton Koster made more and more impressionistic paintings for the art trade. In The Hague he comes into contact with the Dutch painters Gerke Henkes (1844-1927) and Hendrik Willem Mesdag (1831-1915). Both painters lived in The Hague from 1869 and gave him advice.

In 1893 Anton painted bulb fields for the first time and before that mainly dune and forest landscapes. Painting bulb fields becomes a turning point in his life. He specialized in this subject and created a furore. Several works of art by Anton Koster were bought by the Dutch Royal Family. Dutch growers and traders in flower bulbs also bought his paintings as promotional gifts for their customers. Because of this, many paintings became distributed internationally. Nowadays much of his work can be seen in various museums.

Anton Koster was a member of the Dutch Etching Club and the Pulchri Studio in The Hague. He was also a member of ‘Kunst zij ons doel’ in Haarlem and of Arti et Amicitiae in Amsterdam. Anton died at the age of 77 in Heemstede and was buried in the city of Haarlem. 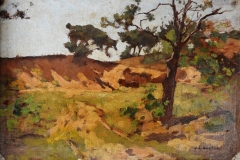