Dutch artist Ben Viegers was born December 17, 1886 in The Hague and died on October 8, 1947 in Nunspeet. His full name was Bernardus Peter Viegers. Viegers was an self-made man.

Ben Viegers was a son of coach driver Peter Jacobus Viegers and of Johanna Engelina Hulzing and lived in The Hague. At a young age, he taught drawing and painting in his grandpa’s workplace, which was a coachbuilder. In 1903-1904, Ben is enrolled in Education 1st Class of the Academy of Fine Arts in The Hague. Charles Dankmeijer (1861-1923) was his friend and teacher. In 1907, Ben participated in an exhibition in Antwerp. Later on, his paintings were seen at an exhibition in 1910 in the city Batavia (Dutch-Indonesia).

From 1921, Ben Viegers became a member of The Hague Art Circle founded in 1891. Here he held contacts with later renowned artists, such as; Jan Toorop (1858-1928), Louis Soonius (1883-1956) and Jan Knikker (1889-1957). In his work, Ben is strongly influenced by the impressionist painting style of The Hague School. He was also inspired by the French impressionists.

Living and working in Nunspeet

In 1938, Ben Viegers moved with his wife from The Hague to the town Nunspeet. He bought a neglected building, that he refurbished himself. In Nunspeet he was among colleagues like Jaap Hiddink (1910-2000), Jos Lussenburg (1889-1975), Frans Huysman (1885-1954) and Jan van Vuuren (1871-1941). At the beginning of World War II, he lived until 1942 in the village Bakkum and later moved to the city Hilversum. In 1943, Ben returned with his wife to Nunspeet. Again, Ben buys a derelict house. The self-restoration of his house was eventually fatal for Ben Viegers. When he raised a heavy window frame he died of a heart attack.

Dutch artist Ben Viegers was especially inspired by the Veluwe (a wooded area) and the villages on the Zuiderzee (an Dutch inner sea). With a bright and cheerful color palette in his hand, he made his paintings outdoor with powerful brush strokes. Ben had a broad field of work, he painted and dragged flower still life, bulb fields, landscapes, gardens, harbor views, interiors, cityscapes, beach views and winter landscapes. 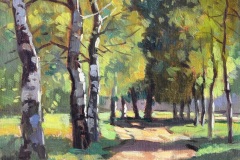 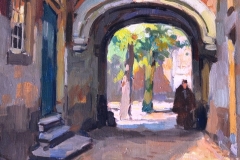 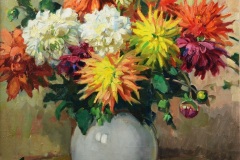