Cornelis Raaphorst comes from a farming family of seven children. He grew up in poor conditions in Wassenaar. From a young age he was involved in drawing and later also painting.

At the age of 25 Cornelis Raaphorst married and had a family with nine children. Cornelis then earned his money as a house painter. In his spare hours he developed himself into an amateur painter through self-study. Only after he got a contract from an art gallery in 1923, Cornelis Raaphorst became a fine artist by profession.

In his non-professional period Cornelis painted and drew mainly villages and landscapes with animals in and around Wassenaar. Then he also started to paint flower still lifes. After Cornelis Raaphorst painted a painting with kittens for art gallery Scheen, he was advised to specialize in this. The paintings with playing kittens of Henriëtte Ronner Knip (1821-1909), were used as an example in the beginning.

Over time Cornelis’s kitten paintings became more and more colorful, because luxury items were added to the canvas. The quality of later paintings also reached a particularly high level. The details of the young kittens, the curtains, the tablecloths and the carpets can be called excellent. It is therefore not surprising that Cornelis Raaphorst has acquired a great international reputation.

An important source about the life of Cornelis Raaphorst is the book ‘Meer dan katjesspel’ by author Theo Raaphorst. Theo is the grandson of Cornelis. This Dutch book is available under ISBN 9789491229008. 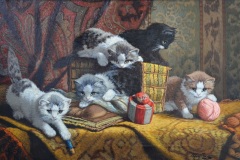