Cornelis Westerbeek was born in Sassenheim on 13 April 1844 and died in The Hague on 22 October 1903. He was a painter as well as a draughtsman. His work is considered as belonging to the Hague School.

Cornelis Westerbeek was born in the village of Sassenheim. This village is situated in the Dune and Flower bulb Region of the province of South Holland. The village arose on an old beach ridge, over which a trade route ran between The Hague, Haarlem and Amsterdam. From the middle of the nineteenth century, the bulb-growing industry settled in Sassenheim.

At a young age he (hereafter called Cornelis Westerbeek Sr.) showed his skill in drawing. From his father he learned, together with his little brother Mourits (1849-XXXX), the basics of the painting profession at an early age.

Sometime between 1850 and 1859, the family, which consisted of two boys, moved to The Hague. Cornelis Westerbeek Sr. went to the Academy of Visual Arts in The Hague at the age of 15. There he is taught by the well-known Hague painter Bartholomeus Johannes van Hove (1790-1880). Soon he becomes influenced by the impressionist painting style of the Hague School.

His impressionistic landscapes with cows or sheep are much in demand at this time, but also afterwards. Cornelis Westerbeek Sr. usually paints the landscapes with sheep with a sunset. The painted light on his subjects is of a high quality. His paintings can therefore be found in various museums, such as the National Museum in Amsterdam.

Cornelis Westerbeek Jr. (1873-1917) was a son of Westerbeek Sr. He too became a painter. Westerbeek Jr. painted in the same style as his father. His favourite subjects were landscapes, forest scenes and animal representations. 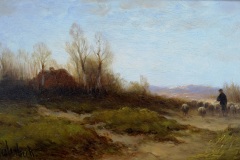