Evert Pieters was born in Amsterdam on 11 December 1856 and died in Laren on 17 February 1932. Besides painter he was drawer and etcher.

Evert grew up with his four sisters and two brothers at various addresses in Amsterdam. The family was poor. After primary school, Evert had to go to work at the age of 12.

According to the ‘Bevolkingsregister 1874-1893’ of Amsterdam, Evert Pieters was registered on 24 February 1874 at Kerkpad 69 in Amsterdam. There he is mentioned for the first time as a painter. On 4 May 1876 to 4 May 1880 he goes into military service. In September 1877 he is de-registered with destination The Hague.

In 1879 he is again mentioned in the ‘Bevolkingsregister 1874-1893’ (Population register) of Amsterdam at the Lijnbaansgracht 11. On 17 December 1879 Evert Pieters is deregistered at this address with destination Antwerp in Belgium.

Evert Pieters in the teachings

At nineteen, Evert went to Antwerp to earn a good living as an apprentice decorator. There he follows the evening drawing classes with Charles Verlat (1824-1890) at the Royal Academy of Fine Arts in Antwerp. In 1883 he submits the painting “Resting time of the woodcutters” for the world exhibition in Antwerp. With this painting, Dutch artist Evert Pieters achieves his first public success.

In 1885, Evert Pieters becomes an apprentice to the Belgian landscape and marine painter Theodoor Verstraete (1850-1907). Then, in 1894, he wins a medal at the World Exhibition in Antwerp with the painting “Wheatfield in Flanders”.

On 15 October 1895, he married Marie Eugenie van de Bossche in the city Haarlem in the Netherlands. Presumably, he then lived in Haarlem for some time. Subsequently, from 1896 to 1897, they stay in Paris and Barbizon. In 1896, Evert Pieters wins a gold medal at the Paris Salon.

Then, in 1897, Evert Pieters settles in the village of Blaricum. In 1898 he wins a gold medal in Barcelona. On the recommendation of Jacob Maris (1837-1899), Pieters eventually becomes a member of The Hague artists’ circle Pulchri Studio. In 1905, he moved to the village Katwijk aan Zee, where he produced many beach scenes. He sold his house in Blaricum to painter August Johannes Le Gras (1864-1915).

From 1909 onwards, he again lived and worked in Blaricum. In 1910, together with art dealer Herman Tersteeg, he travelled through the USA to promote his work. Seven years later, Evert Pieters moved to the village Laren (North Holland) where he lived until his death.

His work is distributed worldwide among art lovers and hangs in various museums. Among others in the Royal Museum of Fine Arts Antwerp, the Frans Hals Museum Haarlem and the Stedelijk Museum Amsterdam.

Evert Pieters taught among others Bernardus Antonie van Beek (1875-1941) and Carel Lodewijk Dake (1886-1946). Beside the Pulchri Studio, he was also a member of the artists’ association Arti et Amicitiae (Arti, Amsterdam). 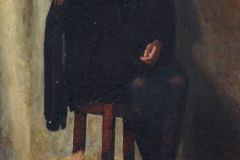