Dutch artist Félicien Bobeldijk was born in Koog aan de Zaan (Zaanstad) on 17 October 1876. Félicien died in Amsterdam on 31 January 1964. Besides painter he was watercolourist, draughtsman, etcher and lithographer.

Félicien Bobeldijk was a son of Aaltje Bobeldijk (1836-1918). Félicien had two older brothers Klaas and Joachim and an older sister Jansje. It is not yet known who his father was.

Nevertheless, Félicien had a happy childhood in Koog aan de Zaan. This is evident from his book ‘Jeugdprentjes’ (Lochem 1934), in which he describes his childhood, supplemented with drawings of the Zaan region. These drawings provide a look back at the parental home, but also at his school and holidays.

From the age of 13, Félicien Bobeldijk attends the School of Arts and Crafts ‘Quellinus’ in Amsterdam. An educational institution founded in 1879 by Pierre Cuypers (1827-1921) with the aim of promoting art education. This association eventually merged with the Gerrit Rietveld Academy. Subsequently, in 1892-1896, Félicien trained at the National School of Arts and Crafts in Amsterdam. This was followed in 1896-1897 by a course at the National Academy of Fine Arts, also in Amsterdam. He was a pupil of August Allebé (1838-1927). His fellow pupils included Johannes Hendricus Jurres (1875-1946) and Herbert van der Poll (1877-1963).

In the period 1897-1898, Félicien Bobeldijk lived in Blaricum. Afterwards, he moves to the Zaanstreek in 1899. In 1900, Félicien wins the Willink van Collen Prize. From 1901 onwards he lives in Castricum.

In 1903, Dutch artist Félicien Bobeldijk returned to Amsterdam to live and work there. In that year, he becomes friends with painter Willem Witsen (1860-1923), from whom he received advice. Willem Witsen belonged to a group of Dutch artists with great artistic and even political influence in the 19th century. The friendship lasts until Willem’s death.

In 1907, Félicien settles in the village of Berlicum, in the province of North Brabant. In 1912, Félicien Bobeldijk returns to Amsterdam, where he will live until his death. He temporarily stays in Versoix (1927) in Switzerland and Vienna (1936) in Austria. 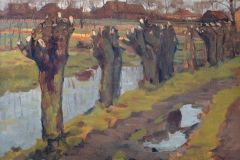