Dutch artist Jan Knikker senior was born on 21 February 1889 in the village Hillegom. He passed away on 10 January 1957 in The Hague. His full name was Jan Simon Knikker.

Jan Knikker was born in Hillegom, in the middle of the flower bulb district of the Netherlands. He lived and worked in Hillegom, Leiden and from 1914 in The Hague. He also lived temporarily (1930-1931) in the village Wassenaar and later again in city The Hague. Jan is self-taught and a landscape painter. His working period was from 1904 to 1957.

His older brother Aris Knikker (1887-1962) was also a painter and draftsman. Therefore he taught Jan the principles of art. Jan Knikker develops a somewhat broader and more colorful way of painting than Aris. Both painters had a high productivity.

In addition, Jan Knikker senior is the father of painter Jan junior (1911-1990). The Knikker family is counted among the ‘second bloom’ of the famous The Hague School.

Jan Knikker mainly made Dutch landscapes in the style of The Hague School. He also painted cityscapes, fishermen and flower still lifes. With a loose touch Jan set a moody and impressionistic subject on canvas. Because of this Hague style his paintings were asked worldwide.

Jan Knikker often sold his paintings to Willem Frederik Hendrik Welter. Willem Welter was an art dealer from The Hague and had twelve children. Three sons from this family later became art dealers.

These three brothers Henk Welther (1885-1947), Henri Welter (1886-1948) and Willem Frederik Welter (1895-1939) also bought paintings from Jan Knikker. In addition, other painters, such as his son Jan and his brother Aris, also made paintings for the three brothers. The paintings were delivered by the artists without signature and then provided by the brothers with chosen names.

Henk Welter signed the paintings with H. Welter and later with H. Welther. Henk changed his last name in Welther at a later age, because his brother Henri declared bankrupt in 1912. Because of this bankruptcy, Henk experienced a lot of trouble because of the same initial as his younger brother. 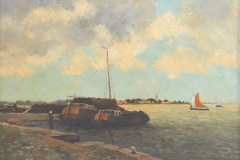 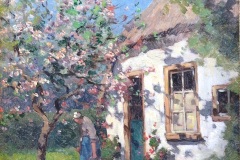 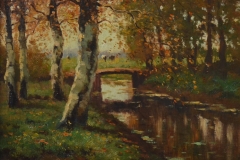 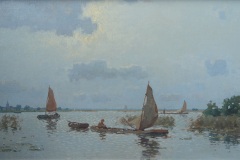