Dutch artist Louis Soonius was born March 10, 1883 in The Hague. His civil status is registered under the name of Lodewijk Soonius. Louis died on March 9, 1956 in The Hague. He was an impressionist painter, draftsman and watercolorist.

Louis Soonius lived and worked mainly in and around his hometown The Hague. About 1898 to 1930 he lived in a small village named Veur. From 1924, the electric Blue Tram drives from Scheveningen to the city Leiden. Louis also made use of this tram because it made a stop in Veur. The village Veur disappears later on in the much larger town of Leidschendam. Louis followed a degree at the Royal Academy of Fine Arts in The Hague.

Louis was a member of the Hague Art Circle (‘Kunstkring’), an association of artists and art lovers founded in 1891. Here he held contacts with later renowned artists, such as; Jan Toorop (1858-1928), Ben Viegers (1886-1947) and Jan Knikker (1889-1957). In his work, Louis Soonius is strongly influenced by the impressionist painting style of The Hague School. Louis himself taught artist Arie Zwart (1903-1981) the technique of painting.

Louis Soonius painted with loose brush strokes his subjects on canvas or panel. He painted mostly outdoors. In the summer months, Louis painted, like his contender Isaac Israel (1865-1934), the beach of Scheveningen. Around 1900 Scheveningen began to develop from a fishing village into a fashionable resort. From this time Louis began to paint sunny, colorful beach views with bathers and playing children. His beach views, where children ride on donkeys, are very popular. Sometimes these paintings gives also a view of the world famous Grand Hotel Kurhaus and Scheveningen Pier. Louis also regularly has painted in the nearby fishing village Katwijk and in the university city of Leiden.

Louis Soonius has painted many subjects, such as: port, sea and city views, winter landscapes, interiors, portraits and female nude. Louis’s artworks are exhibited in various Dutch and international museums. His paintings can be seen in the ‘Rijksmuseum’ in Amsterdam and the Museum ‘Kunst der Westküste’ in Germany. There are also many paintings in corporate and private collections. 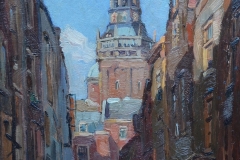