Dutch artist Louis Stütterheim was born on August 15, 1873 in Rotterdam and died on November 23, 1943 in Gouda. His full name was Lodewijk Philippus Stütterheim. Besides being a painter, he was also a draftsman.

Louis Stütterheim comes from a Jewish family and started painting at the age of 15. He worked at a trade office and also studied at the Academy for Visual Arts in Rotterdam. Stütterheim then moved to The Hague, where he spent a short time at the drawing academy. He also received lessons from Alexander Henri Robert van Maasdijk (1856-1931), Jan Striening (1827-1903) and Johannes Anthonie Balthasar Stroebel (1821-1905).

Stütterheim began to paint professionally from 1904 onwards. In 1912 he moved to the island of Java in Indonesia, and then moved to Philadelphia in the United States in 1914. From 1916 until his death Stütterheim lived again in the Netherlands.

Back in the Netherlands

When returning to the Netherlands, Louis Stütterheim settled in the city of Utrecht. He then moved to Amsterdam and became a member of Arti et Amicitiae (Arti, Amsterdam). Together with his friend and painter August van Voorden (1881-1921) he visited the village of Kortenhoef in the province of North Holland. In Kortenhoef, Stütterheim painted the Dutch polder landscapes for the first time. August van Voorden knew this village because he had lived there for some time.

From 1924 to 1942 Louis Stütterheim lived in Hilversum. During the Second World War he probably painted under the pseudonym J. v.d. Meer to hide his Jewish origins. During the war he left for the village ‘s-Graveland in the municipality of Wijdemeren. Stütterheim liked to paint in the wild. He preferred the polder and lake area in the villages Kortenhoef and Ankeveen. Stütterheim’s work gives a true-to-life image of the North Holland landscape of years long gone.

The early paintings of Louis Stütterheim fall under the aftermath of the Hague School. As the years pass, his color palette becomes lighter. More and more French influences can then be recognized. Stütterheim painted flower still lifes, landscapes, beachscapes, marines, still lifes and cityscapes with vigorous brush strokes. 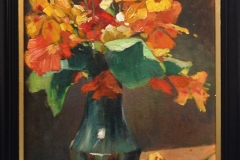