Dutch artist Piet van Wijngaerdt was born in Amsterdam on 4 November 1873. Piet died in the village Abcoude on January 25, 1964. His full name is Petrus Theodorus van Wijngaerdt. Besides being a painter, he was an etcher, graphic artist, lithographer and draughtsman.

In 1901, Piet van Wijngaerdt left Amsterdam for Paris. He stayed there for a few months, and then settled in the village Kortenhoef (Wijdemeren) in 1902. Subsequently, Piet moved to the village Katwijk (South Holland) in 1905. He then paints in the tradition of the Hague School.

In 1910, Piet van Wijngaerdt exhibited ‘moody landscapes’ in the Amsterdam Municipal Museum. Paintings by the luminists were also exhibited there at the time. By optically mixing colours, Luminism emphasises strong light effects and has many similarities with Pointillism. Under the influence of this new movement, Piet broke with the impressionism of the Hague School in late 1911. A rapid revolution follows, in which he applies Luminism in his work. This also causes conflicts with the then still conservative Amsterdam artists’ associations Arti and Stint Lucas.

The Dutch artists’ circle will prove to be the platform for artists around the Bergen-Amsterdam twin centre. Bergen is a small village on the coast in the province of North Holland.

Because of the war, French painter Henri Le Fauconnier (1881-1945) flees to the Netherlands at the end of 1914. Not long afterwards, Piet van Wijngaerdt and Henri Le Fauconnier come into contact. Under the influence of the cubist painter Le Fauconnier, Piet’s painting style changes again. Dark and bright colours appear on the canvas, in sharp contrasts. Details gave way to large surfaces, juxtaposed almost without lines.

In 1916 Henri Le Fauconnier settled in Amsterdam. In that year, the artists’ association The Signal (‘Het Signaal’) is founded by Le Fauconnier and Wijngaerdt. The theories of the group were published by Piet in the magazine The Signal. This new figurative dark expressionism was widely imitated and eventually forms the theoretical basis of the Bergen School. This makes Piet van Wijngaerdt the founder of the Bergen School.

In 1922, Piet van Wijngaerdt leaves for Haarlem. He did not live there for long, as he moved to his birthplace, Amsterdam, in 1924. Piet was most successful in the twenties and thirties. He has frequent exhibitions in the Amsterdam Municipal Museum, Mak Art Gallery in Amsterdam and in the ‘Lakenhal’ in Leiden.

From 1941 until his death, Piet van Wijngaerdt lived in the village of Abcoude. In 1954, on the occasion of his 80th birthday, an exhibition was organised in the Amsterdam Municipal Museum. He painted flower still lifes, peasant scenes, figure representations, interiors, landscapes, nudes, portraits, city views and self-portraits. 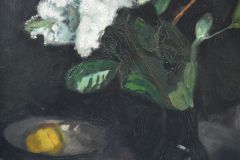