Dutch artist Willem de Zwart was born on May 16, 1862 in The Hague. He died in The Hague on December 11, 1931. His full name was Wilhelmus Henricus Petrus Johannes de Zwart. His work is counted among both The Hague School and Amsterdam impressionism. In addition to being a painter, Willem was also a watercolorist, etcher, draftsman and pottery painter.

Willem de Zwart grew up in The Hague as the oldest of six brothers and two sisters. He comes from a family of coal burners. Willem studied from 1876 to 1880 at the Royal Academy of Visual Arts in The Hague. He was then fourteen years old and was taught by Johan Philip Koelman (1818-1893). His fellow students were Johannes Akkeringa (1861-1942) and George Hendrik Breitner (1857-1923). His younger brother Pieter de Zwart (1880-1967) also became a painter.

In 1880 he was called up for his military service in the Dutch army. His friend and painter Willem Carel Nakken (1835-1926), however, managed to buy him free from military service. Willem Nakken did this with the sales proceeds from Willem’s youth work and to point out his artistic talent.

During 1895 to 1896 he lived in the village of Soest and until 1898 in the city Hilversum. Willem’s talent did not go unnoticed. In 1898 he concluded an agreement with the renowned art dealership E.J. Van Wisselingh & Co from Amsterdam. Because of this his money worries had disappeared and he moved to the popular village of Laren until 1900. Willem de Zwart received various awards at international and national exhibitions. In 1900 to 1905 he moved to the city Amsterdam. After that he lived in the village of Veur until 1917.

His painting style became more and more expressive over the years and kept pace with his unpredictable behavior. In 1910, the art dealer Van Wisselingh & Co broke the agreement with Willem de Zwart. From that moment it goes downhill with the artist. In 1917, Willem returned to The Hague, where he was admitted to the ‘Medical Foundation for the Insane’.

He was a teacher of: Herman Bogman Jr., Thaddeus van Eijsden, Herman Heuff, Cor Noltee and Martinus van Regteren Altena. Dutch artist Willem de Zwart also taught at the Academy of The Hague. He was also a member of Pulchri Studio (The Hague) and Arti et Amicitiae (Amsterdam).

Willem de Zwart painted animals, landscapes, market scenes, cityscapes, beach scenes, portraits, religion and still lifes in a naturalistic-impressionistic style. His paintings display a kinship with Amsterdam-Impressionism focused on people and the city. His nickname was “The Hague Breitner.” His work is present in the National Museum in Amsterdam, the Municipal Museum of The Hague and the Dordrechts Museum. 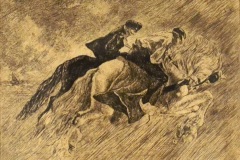