Dutch artist Willem Steelink Jr. was born in Amsterdam on 16 July 1856. He died in the village of Voorburg on 27 November 1928. Besides being a painter, he was also a graphic artist. He is associated with the followers of The Hague School, but also the Laren School. The Laren School is a collective name for a group of artists. These artists worked in and around the village of Laren at the end of the 19th until the beginning of the 20th century. They used a painting style that was originated from The Hague School.

Then he established himself as an independent painter of historical subjects. He also illustrated a lot, as long as it had to do with history. So he made the drawings for the New Testament in the Sudanese language. He also etched paintings by famous painters, such as Johannes Bosboom (1817-1891) and Jozef Israëls (1824-1911).

Willem Steelink Jr. was traveling and worked for some time in Antwerp, Scheveningen, Laren and in Rome. Later, interest in history declined and he focused more on the present. After 1894 the change came when he started painting landscapes with sheep and other cattle. Together with Hein Kever (1854-1922) he travelled to Laren in the summer, where he painted landscapes with a beautiful light. Sheep, and their shepherds, was his favourite subject. His work was then clearly influenced by the famous painter Anton Mauve (1856-1894).

Willem Steelink Jr. has also lived in Hilversum, Scherpenzeel, The Hague, Laren, Amsterdam and in Voorburg. In The Hague he lived next to painter H.J. van der Weele (1852-1930), with whom he worked a lot together.

Willem Steelink Jr. has received many awards for his work. He has been awarded the Belgian Crown Order, the Italian Lazarus Order and a Gold Medal in Munich (Germany). Steelink Jr. was also Officer in the Dutch Order of Orange-Nassau. Steelink was a member of the organizations of artists: Pulchri Studio in The Hague and Artii et Armicitea Amsterdam. The largest collection of his works can be seen at the Municipality museum (Gemeentemuseum) The Hague. 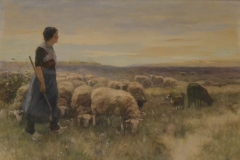