Dutch painter Wilhelm Alexander Knip was born on 31 January 1883 in Amsterdam. He died on Blaricum 28 October 1967. Wilhelm Knip was a painter as well as a draughtsman, watercolourist and pastelist.

Wilhelm Knip was a son of Wilhelm Alexander Knip (1856-1917) and Christina Jacoba Schultz (1859-xxxx). His father was a swimming teacher by profession and came from German Baden. The family consisted of five children and lived in Amsterdam.

In 1905, Wilhelm Knip settled for the first time in the Dutch village of Laren. He rents a part of the “Vlassschuur”, where he establishes a studio together with other artists. In 1912, he has a house with his own atelier built on the Jagersweg in Laren. In that year Wilhelm marries Maria Anna Hulstede (1888-1966) in the village Bussum on 1 October. Around 1921 he settles at the Eemnesserweg 1057 in Laren.

After 1921, Wilhelm Knip worked and lived temporarily in many places in France, Italy and Spain. His use of colour then became lighter. He then painted, pastelled and watercoloured mainly landscapes, harbours and townscapes.

In the early 1930s, he had architect H.C. Elzinga design a new house. This large detached house was built in 1934 at Torenlaan 57 in the village Blaricum. The gable stone above the bay window, marked ‘De Knip’, refers to the first owner Wilhelm Knip.

Wilhelm Knip painted a wide range of subjects. His genre was landscapes, marines and animal representations. He also painted winter landscapes, townscapes, harbour views, interiors, flower still lifes and figure representations. Wilhelm painted in an impressionist style and is considered one of the great painters of the Laren School. He signed his paintings with W.A. Knip.

Wilhelm Kneip was a member of the Sint Lucas and Arti et Amicitiae associations in Amsterdam. Later, he was also a member of the Association of Visual Artists Laren-Blaricum and the Gooische Association. After the Second World War, he became a member of the Rembrandt Society. In 1942, Wilhelm won the St. Lucas Prize and in 1953 the Arti Medal. His work is included in the collections of the Van Abbemuseum Eindhoven and the Singer Museum Laren, among others. 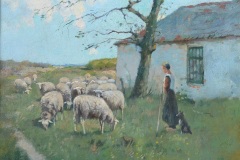