Dutch artist Constant David Ludovic Artz was born on June 3, 1870 in Paris. He passed away on February 23, 1951 in the village Soestdijk (Netherlands). Constant was also a watercolorist, copyist, art dealer and art teacher.

Constant Artz is a son of painter David Adolph Constant Artz (1837-1890) and Hélène Artz-Schemel (1850-1907). His father was a well-known artist from the art movement of The Hague School and Japonism. Constant was born in Paris, where at the time many Dutch artists lived. His father shared a studio with German artist Otto Franz Scholderer (1834-1902) and Dutch painter Willem Maris (1844-1910). During this period, his father often exhibited paintings with the Dutch painter Frederik Hendrik Kaemmerer (1839-1902).

In 1874 the Artz family moved to The Hague. Constant proved to have an artistic talent at a young age. At the age of twelve he was enrolled at the Royal Academy of Art in The Hague. In 1899 he then went to study with Tony Offermans (1854-1911). In addition, he received advice from his father Adolph Artz, Willem Maris and Hendrik Willem Mesdag (1831-1915).

Just like his father, Constant was fascinated by nature. He painted many landscapes with windmills and navies. In addition to these genre performances, he also painted cityscapes and still lifes. Presumably under the influence of Willem Maris he began to focus on Dutch landscapes with ducks by the water. For these scenes, there was a great interest among the public in the 19th century. With a smooth, impressionistic touch he painted ducks with their chicks in all their actions. Constant was a master in the processing of sun and light effects in his work and had a great sense of color. His paintings, often small in size, stand out because of their friendly appearance and are still loved. Constant signed his work with ‘Constant Artz’.

His professional period begins from about 1899 until his death in 1951. Constant was also a very skilled watercolorist. He mainly copied watercolors by artists from the beginning of The Hague School. The subjects Constant painted are animal representations (genre), landscapes (genre), marines (genre), cityscapes and still lives. Various museums have work by Constant Artz. 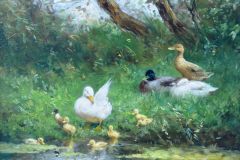 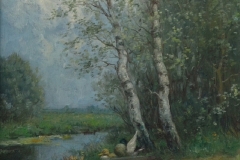 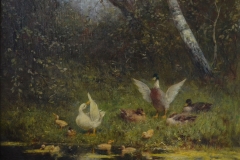