Dutch artist Johannes Hilverdink was born in Groningen on January 18, 1813 and died in Amsterdam on October 1, 1902. He was a watercolorist, lithographer, painter, draftsman, pastelist and graphic artist.

In Amsterdam, Johannes Hilverdink goes to the Drawing Academy. At the academy he is taught by Jan Willem Pieneman (1779-1853) and Jean Augustin Daiwaille (1786-1850). Both Pieneman and Daiwaille were director of this Royal Academy of Visual Arts in the following period. Daiwaille was also the father-in-law of painter Barend Cornelis Koekkoek (1803-1862), who attended the Drawing Academy in 1825-1826.

Johannes Hilverdink lived and worked in Amsterdam and was married to Martha Catharina Peduzzi. Their two sons Johannes Jacobus Antonius (1837-1884) and Eduard Alexander (1846-1891) were also painters. He taught his two sons, but also his nephew Jacobus Johannes Josephus (1840-1879). This nephew was a son of his older brother Jacobus Wilhelmus Adrianus Hilverdink (1809-1864), also a painter.

Johannes Hilverdink painted from around 1828 in the style of the Romantic School. His genre was landscapes and seascapes. In addition to coastal views, mountain landscapes and navies, he also painted church interiors and city views. He traveled abroad to Belgium, Germany, England, France and Greenland.

Collections in the National Museum, the Shipping Museum and the Municipal Museum all in Amsterdam. But also in the Boymans van Beuningen Museum in Rotterdam and the Teylers Museum in Haarlem. 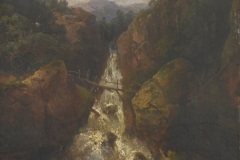