Dutch artist Jan Willem Sluiter was born in Amersfoort on May 24, 1873. Willy Sluiter died in The Hague on May 22, 1949. He was a (political) draughtsman, watercolourist, graphic artist, illustrator, lithographer, designer, pastellist and painter.

Willy Sluiter grew up until 1878 in Amersfoort, until 1883 in Nijehaske (Heereveen) and then until 1890 in Zwijndrecht. Willy was a son of Jan Willem Sluiter (1839-1902) and Johanna Hillegonda Cornelia Suermondt (1846-1931). His father was a notary and amateur draughtsman. Willy’s talent for drawing was stimulated at an early age. The exceptional talent for drawing was discovered by the painter Bernard Blommers (1845-1915). Bernard Blommers advised him to go to the Rotterdam art academy.

In 1891 Willy moves to Rotterdam and becomes a student at the Rotterdam Academy of Visual Arts until 1894. His teacher at the academy was the Brussels-based painter Alexander Henri Robert van Maasdijk (1856-1931).

In 1896 Willy moves to his former residence Zwijndrecht. He stayed here until 1899. In this period he has his studio in nearby Dordrecht, above the “Blauwpoort”.

Katwijk by the Sea

In 1899, Willy Sluiter bought a plot of land in the village Katwijk by the Sea, on which he had a house built. In that year, he also made a trip through Europe (France, Germany, Italy) with a visit to Paris and the Louvre. Subsequently, in 1901, he married Agatha Anna Louise van Nievervaart (1874-1957) and settled in Katwijk. From this marriage daughter Johanna Adriana Sluiter (1902-1991) is born.

In Katwijk, Willy Sluiter painted many beach- and seascapes with bombshells, shell-fishermen and the fishing people. These subjects are related to the Hague School, but his palette is lighter and more colourful and shows many human activities. Willy was also very active in cultural life in Katwijk. Together with other painters there, such as Jan Toorop (1858-1928) and Gerhard Morgenstjerne Munthe (1875-1927), he organized exhibitions of paintings. In Katwijk he also met German painter Hans von Bartels (1856-1913), from whom a friendship developed. From 1906, Willy joined the Hollandsche Teekenmaatschappij in The Hague.

Laren and The Hague

Around 1910 he moved with his family to the village Laren (Noord-Holland). There too he played a prominent role in cultural life. From Laren, Sluiter regularly visited the fishing villages of Edam and Volendam. Willy Sluiter was a welcome guest at hotel Spaander in Volendam, where artists from the Netherlands and abroad stayed. He painted at fairs and feasts there, capturing the local people in traditional costume. A well-known model is Hille Butter from Volendam, whom he would portray several times.

The family then left for The Hague in 1916. Meanwhile, Willy Sluiter is an established artist and a well-known illustrator of books, posters and calendars. He is a much sought-after portraitist and likes to be found in well-to-do circles in The Hague. He also portrays members of the Dutch royal family several times. In addition, he frequently records the mundane life along the coast of Scheveningen.

In addition to Dutch associations, Willy Sluiter also becomes a member of the Pastel Society London and the Society of American Illustrators. He has won many awards, including silver medals from Amsterdam and St. Louis (United States). 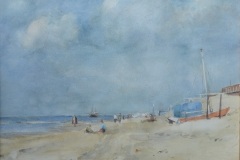